Technology makes it possible for fleets to measure and monitor nearly every aspect of driver performance. With so much data on drivers, some fleets have invented new payroll and incentive programs to reward their higher performers.
Roehl Transport and Nussbaum Transportation offer two examples of successful pay-for-performance programs. The central cog in these and other high-tech programs is that drivers perceive the measurements to be fair and completely within their power to control.

Stay Metrics compiled survey data from more than 4,000 drivers from 31 different carriers. Of those drivers surveyed, 360 are paid hourly 1,795 are paid per mile, and 2,364 are paid a percentage split. Twenty two of the 31 carriers pay their drivers in two or more ways.

The findings also indicate that drivers who are paid on a percentage split seem more satisfied with their dispatchers.

“In its entirety this study reveals drivers paid a fixed percent of the invoice charged to the customer feel a sense of fairness,” said Tim Hindes, president and chief executive of Stay Metrics. “This data is important as carriers look to identify pay packages that will increase satisfaction.”
Tim Judge, the director of research at Stay Metrics and a professor of management at Notre Dame, noted a high correlation between perceived input into oneâ€™s pay and pay satisfaction.

“Employees who feel they have input into how their pay is determined are much more likely to be satisfied with their pay, even controlling for the amount of pay they receive,” he said. “Thus, how someone is paid is as important as what they are paid. I think paying based on customer charge leads drivers to believe that their pay is fair because it shows an alignment between what the carrier gets and what they get.”

This study is the first of two parts looking at pay types and driver satisfaction; the findings from part two will address whether higher pay satisfaction means better retention, Hindes said.

Stay Metrics researches driver retention as part of the Drive for Gold program it provides to motor carrier clients. The program includes online rewards designed to build loyalty. Drivers sign into a company-branded website, hosted by Stay Metrics, to access information and monitor the points they are rewarded monthly in categories that could include safety, compliance, work anniversaries, birthdays and many other possibilities.

Stay Metrics combines the online platform with driver satisfaction research it conducts on behalf of its clients through phone interviews and online surveys. 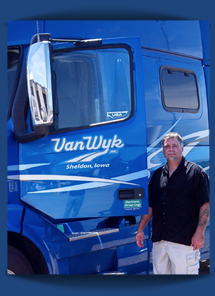 "I went looking for a company who cares about my success as much as their own. What I found was an honest, professional, respectful team, who value me for the professional I am. I feel I have a home and a future doing what I love without sacrificing my values or family life."